The National Coalition of Blacks for Reparations in America (N’COBRA) is the premiere mass-based coalition of organizations and individuals organized for the sole purpose of obtaining reparations for the Black descendants of the Maangamizi in the United States.

N’COBRA’s founding meeting, September 26, 1987, was convened for the purpose of broadening the base of support for the long-standing reparations movement. N’COBRA has individual members, national and local organizational members and organizational affiliates. N’COBRA has chapters, members, affiliates, and supporters throughout the U.S. and in Africa, Europe, Central and South America and the Caribbean. N’COBRA is directed nationally by a board of directors. N’COBRA’s campaigns and work is organized through national commissions, and holds an annual national membership meeting and conference to conduct the business of the Coalition as well as to evaluate and introduce new campaigns and strategies.

The N’COBRA logo is composed of 3 Adinkra symbols whose meanings from bottom to top are:

NKONSONSON OWO FOR A ADOBE BIRIBI WO SORO: Together these symbols express our links in this, and the next life; that We share a common blood relation which never break apart; and that We can perform the impossible. *

First organizing meetings held in D.C. at the headquarters of the Majestic Eagles.

Second organizing meeting held in D.C. at the headquarters of the Majestic Eagles.

Fourth Organizing meeting held in DC at the Commission for Racial Justice. The National Coalition of Blacks for Reparations in America (N’COBRA) is formed.

N’COBRA receives a letter from Congressman John Conyers, of Detroit, Michigan, requesting the organization’s review and comment on a legislative summary that he planned to incorporate in a bill to be introduced to the House of Representatives.

N’COBRA convenes a public meeting at the Reeves Center, in Washington, DC to discuss and respond to Congressman Conyers’ request.

Congressman Conyers introduced H.R. 40 to the House of Representatives.

A Year of Black Presence (AYBP):  In June 2001, AYBP, a pilot program was launched in Philadelphia by Milt McGriff, to mobilize Reparations activists on Capitol Hill. Since its inception, AYBP has mobilized thousands of reparations activists to Washington, DC to agitate Congress for support of HR 40, to establish a commission to study slavery in America and its present day impact on African Americans and determine appropriate remedies. Representative John Conyers, sponsor of HR 40, since 1989, credits AYBP with elevating the Reparations discussion in the Congress

NCOBRA.org, N’COBRA first official website.  For over 15 years it was the largest and leading reparations website for information and research.

America Must Atone: Reparations Now!, Million Man March/Day of Atonement:  A national campaign leading up to and during the 10th anniversary of the MMM march in DC. Focused on mobilizing for reparation during the anniversary march, included Reparations lawn signs, t-shirts, bumper stickers, reparations flyers & handouts 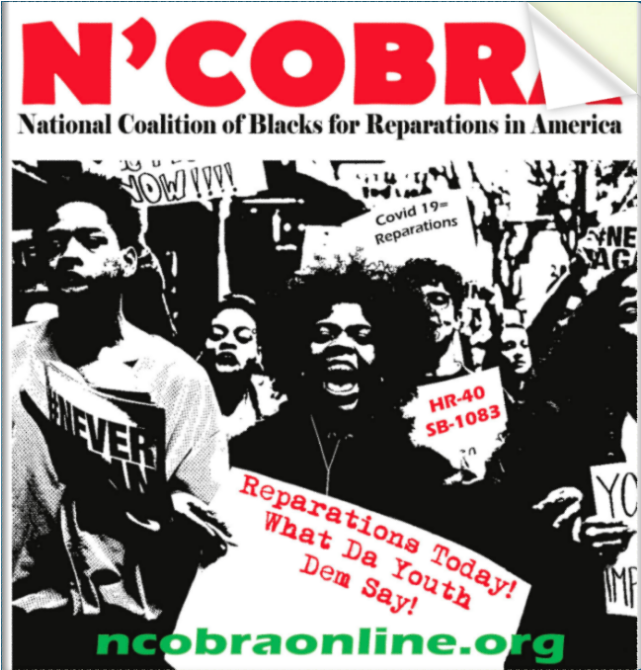