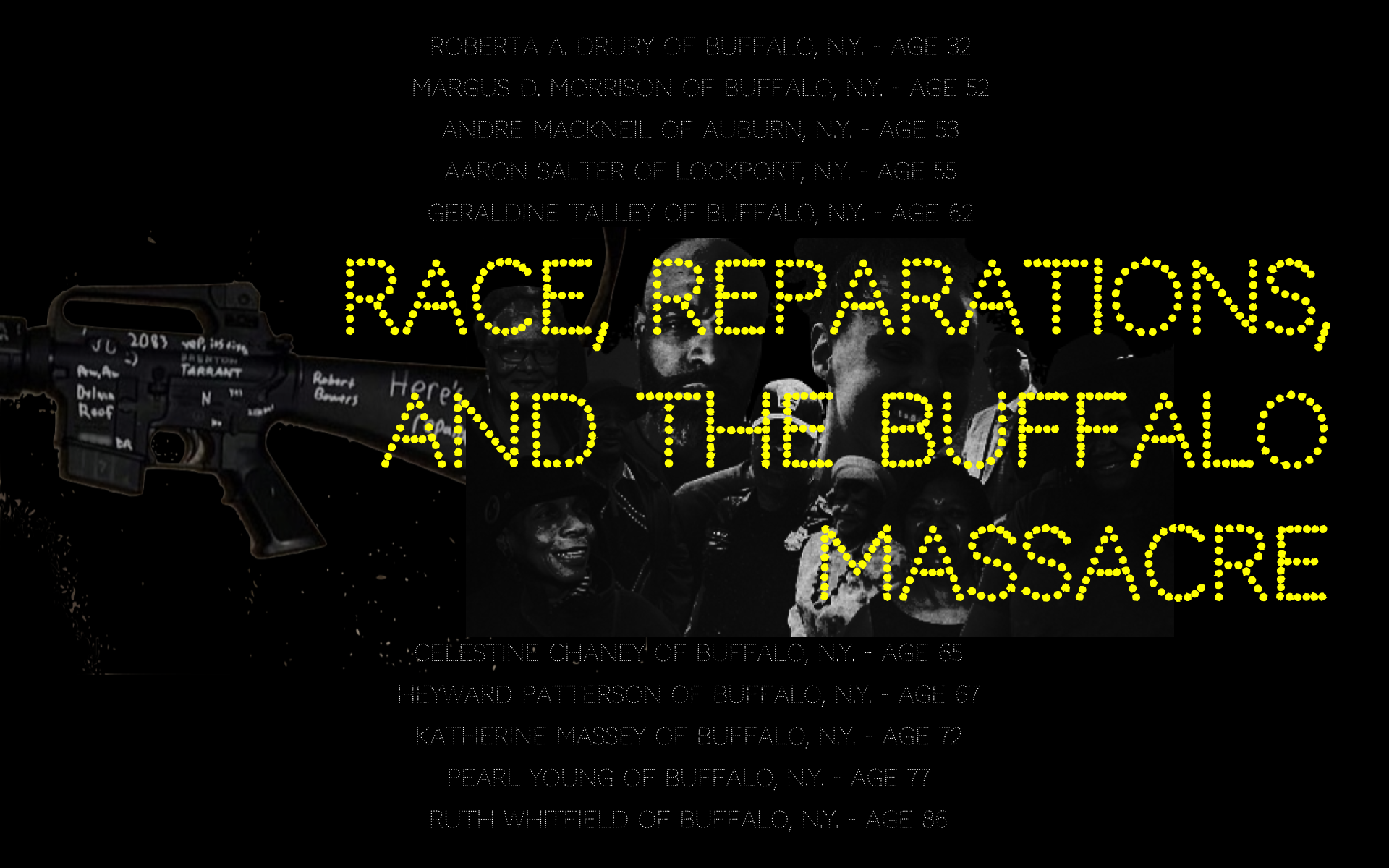 If there was one thing made clear in the Buffalo Massacre, it is that public officials cannot ignore the reparations conversation. In addition to the n-word being written on the assault rifle of the domestic terrorist responsible for the murder of 10 Black Americans at a Tops Friendly Markets supermarket in Kingsley, Buffalo, NY, on Saturday, May 14th, 2022, Payton S. Gendron, the gunman, wrote on the buttstock of his weapon, “These are your reparations.”

All across the country from the State of California to New Jersey, units of government and municipalities are accepting bills to develop task forces to adopt reparations proposals in the face of politicians exclaiming that specific legislation and policies cannot be made based on race. However, the United States and each united of government in the U.S. can and has made specific legislation and policies based on race, ethnicity, nationality, and sexual orientation, giving no excuse to why the same cannot be done for African Americans.

Where each of these aforementioned communities have faced many injustices at the hands of government and members of society who have caused harm, these legislative measures of protections are deserved! That said, the same must be true for the “American Negro,” those descendents of enslaved Africans in the United States, right? More than 4,000,000 of their ancestors and antecedents were enslaved in the United States, destroying their peoplehood and culture and denying them the fruits of their own labor. The denial of food, housing, protections of the government, education, health care, employment contracts, schools for children, and fair courts were all sanctioned by the U.S. Government, right? Wouldn’t there be a need to directly address Black Americans through legislative action? What makes Black Americans different, or less deserving than other members of society?

Just like the previously mentioned groups have had public policy in favor of their right to life, liberty and the pursuit of happiness, there have been injustices that have affected Black Americans that deserve repair… They have survived the Negro Acts of the early colonial period, history of hundreds of Ku Klux Klansmen that have taken political office in the United States both publicly and in secret, Black codes of 1865, the international implications of the Berlin Conference of 1884 and global colonialism, national Sexual Sterilization Acts from 1907 to 1970, the Racial Integrity Act of 1924, denial from participation in the Servicemen’s Readjustment Act of 1944, the Highway Act of 1956, sharecropping, convict leasing, Black suffrage, redlining and gerrymandering, displacement and inadequate housing by government housing policies that include discriminatory VA/FHA practices including “Urban Renewal” and a variety of local and federal “affordable” housing programs, gentrification, the War on Poverty in 1964, the War on Drugs in 1971, the Crime Bill of 1984, disproportionate criminalization at the hands of the United States’ criminal justice system, and so much more…

Yet, many legislators say they cannot or simply will not provide plans or proposals exclusively for the Black/African-American community. After it has been done for so many other social and ethnic groups in America and across the globe, it is time that candidates and legislators address the history of the nation stifling Black Americans’ safety, health and well being.

African Americans have directly suffered, and continue to suffer from the United States’
• Pseudoscientific subordination to civility, humanity and society;
• International kidnapping and global human trafficking;
• Physical torture and corporeal exploitation;
• Bondage, sadism and masochism;
• Religious manipulation, spiritual duress, and iconoclasm;
• Ravage adulterating and progenitive bastardization;
• Racial antagonization and ethnic appropriation;
• Psychological torment, cognitive paralyzation and cerebral traumatization;
• Defamation of character to peoplehood and identity theft;
• Standardized eugenics, sterilization, and genocide;
• Compulsory and coercive medical malpractice;
• Illegal and unlawful seizure and destruction of land and property;
• Asset annihilation and capital bankruptcy;
• Economic repression and financial depression;
• Governmentally enforced dislodgement and displacement;
• Environmental toxification and degradation;
• Ecological opiating and inebriation;
• Accredited miseducation and authorized misinformation;
• Endorsed racism and municipally sponsored prejudice;
• Exonerated lynchings and absolved massacres;
• Overt vilification and unjust criminalization;
• Corrupt policing and mass incarceration;
• Excessive convictions and exaggerated sentencing;
• Social inequality and justified incivility;
• Violation of their 4th amendment right pertaining to illegal and unlawful search and seizure;
• Violation of their 5th amendment right of private property not taken for public use without just compensation;
• Violation of their 6th amendment right of no judgements by impartial juries;
• Violation of their 8th amendment right of non-excessive bails and inflictions of cruel and
unusual punishments;
• Violation of their 14th amendment rights sections 1 & 2 for no creation and enforcement of laws to abridge the rights of naturalized citizens of the United States, deprivation of life, liberty, and property without due process of law, and unequal protections of the laws;
• Violation of their 15th amendment right to vote for 94 years.