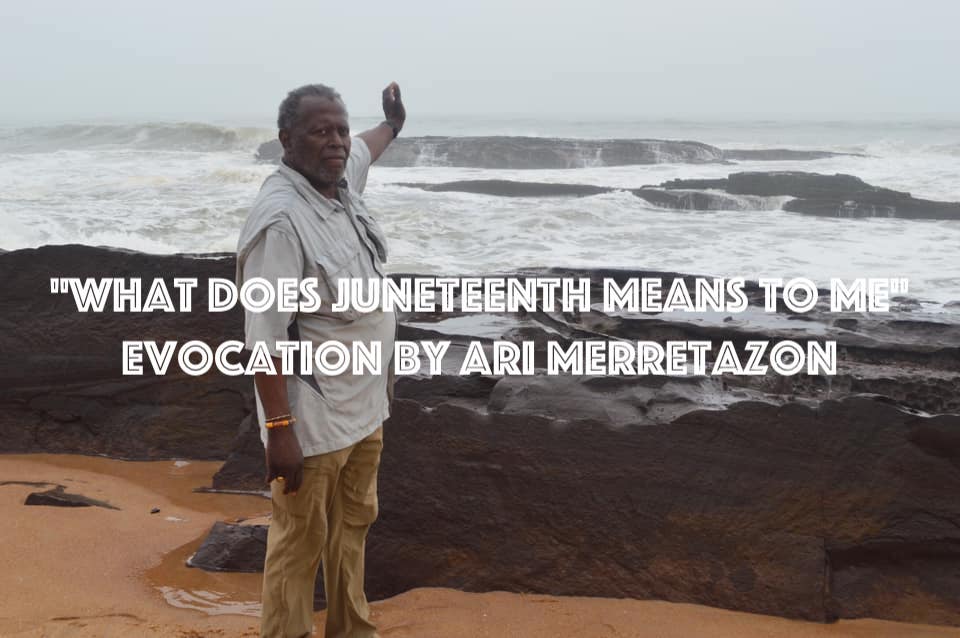 “Before my time starts, I extend libations to all of my people who struggled for me to keep struggling for reparations in the wake of the socialcide of African descendants in the United States. I remember them. Our struggle continues.

Thanks to the African American Advisory Committee (AAAC/At NASA Goddard Space Flight Center) for the invitation to present what Juneteenth means to me. To set the context for my presentation I will read the proclamation that made Descendants of Africans Enslaved in the United States (DAEUS) people again, under law. These are the exact words of General Orders Number 3 that launched “The First Juneteenth.”
—————————————————————-
“The people of Texas are informed that, by a proclamation from the Executive of the United States, all slaves are free. This involves an absolute equality of personal rights and rights of property between former masters and slaves, and the connection heretofore existing between them becomes that between employer and hired labor. The freedmen are advised to remain quietly at their present homes and work for wages. They are informed that they will not be allowed to collect at military posts and that they will not be supported in idleness either there or elsewhere.” —General Orders, Number 3; Headquarters District of Texas, Galveston, June 19, 1865
________________________________________________________
Before this proclamation DAEUS were considered property. The word “Free,” although heard two years later, put them in a whirlwind of celebration that very moment even though they were dead-broke, without brick, bread, or thread. This year marks the 156th anniversary of Juneteenth.

More context: When Maj. Gen. Gordon Granger issued the above order, he didn’t know he was also establishing the basis for a holiday, “Juneteenth” (“June” plus “nineteenth”)–today the most popular annual celebration of emancipation from slavery in the United States.

Juneteenth means, to me, “to acknowledge the historic pain caused by — and lives lost– to being enslaved as property; it means to celebrate our Peoplehood, to connect and reflect on how we could now move forward and achieve the permanent and lasting repair.

Juneteenth–to me–means a time to appreciate that African Americans were on the front line of every war of our nation, from the Spanish-American War, throughout the Revolutionary War, the Civil War, both World Wars, the Vietnam War, and Iraq and Afghanistan Wars. It means that this level of sacrifice commands a national holiday.

What Does Juneteenth Means To Me?
It means to set aside a national holiday so as not to forget the context of what happened to millions of Enslaved Africans and their descendants. My/Our Ancestors were victims of what is known as a “crime against humanity,” Chattel Slavery.” We are their descendants. Juneteenth means to me that the greatest country in the world was built on the backs of my ancestors by terrorism and torture.

To me, it means that there must be a national holiday to recognize the progress we have made as a nation.

Juneteenth means to me that a 2nd Reconstruction period must be created to not only repay the debt but repair the intergenerational vestiges of Chattel Slavery.
Juneteenth means to me that you must never forget what happened here in America and make every reasonable effort to repair the human damage not only for chattel slavery from 1619 to 1864, and for the end of Reconstruction from 1865 to 1870, and Jim Crow from 1871 to 1963, and even Affirmative Action Era, 1964 to 1979.

Juneteenth means to me that chattel slavery was not that long ago-56 years when we subtract 1865 from 1965(Right to Vote), and then subtract 1965 from 2021(The civil rights era) you get 56 years. Its vestiges still interfere with all of us achieving our human possibilities today. Some of you might be 56 this year or next year. For the Descendants of Africans Enslaved in the United States (DAEUS) the word “Free” put them in a whirlwind of celebration of that moment. Even though they were freed dead-broke without brick, bread, or thread.

To me, as a decorated Vietnam Veteran, Juneteenth means, African Americans have paid our dues with our blood. Some gave it all, but we all gave some. America owes African Americans much more than we citizens as a whole are willing to acknowledge.

To me and other African Americans, Juneteenth is a day of celebration that includes family gatherings, cookouts, storytelling about their ancestors, music, and dance.
Juneteenth, to me, is not our July 4th, as the words of Fredrick Douglas so clearly reminds us. It is much more.

To me, Juneteenth is akin to acknowledging our resilience and survival as a special people, with a specific culture as the facts and circumstances of history show. Celebrating our Peoplehood is the essence of our Juneteenth Holiday. Above all else, to me, this is the most important reason for Juneteenth.

To me, each year Juneteenth means more advocacy to make it a paid national holiday and to recognize the importance of Juneteenth as part of the nation’s history. It means, to me, that all Americans could participate in a national holiday because our collective memories reinforce our values of who we are and symbolize “collective freedom” as a nation. Currently, 47 states and the District of Columbia recognize Juneteenth as an official state holiday.

As I close, Juneteenth, to me, has long been an important holiday in the African American community, a time to repair the peoplehood of African Americans in celebration rather than mourning and avenging.

To me, Juneteenth means that we as a nation must set aside “June 19th” as a special time to acknowledge and celebrate the historical contributions of “Descendants of “Enslaved” Africans to the infrastructure of this nation.

My “special thanks” to Attorney Malika Graham. Please don’t hold anything I’ve said against her. Remember she is a leader with NASA/GFSC and is my hardworking, super-fantastic daughter.

Enjoy and be proud of your work in holding the 1st Juneteenth Event at NASA/GFSC—YOU ALL ARE HISTORY MAKERS! I LEAVE YOU WITH THE SAME QUESTION: WHAT DOES JUNETEENTH MEAN TO YOU?”